A few blogs ago I was on about that documentary about New York Dolls bassist Arthur “Killer” Kane called New York Doll. As part of the music documentary-by-numbers process there were a selection of celebrity talking heads telling us how amazing/influential/iconic/seminal the New York Dolls were.

Sadly, for me at least, one of those heads was Bob Geldof. To cut to the chase; I hate Bob Geldof. Not completely irrationally but, you know, close enough. I had the misfortune to meet him once (we were both playing at a very small festival in Middlesbrough so you get an idea of how prestigious it was). He was one of the most boorish, arrogant, obnoxious men I have had the displeasure to be backstage with. So when he turned up in that otherwise lovely documentary telling me stuff about the Dolls that was already apparent anyway as well as blahhing about some schmaltzy backslapping rubbish about going to see them my back was immediately up. It marred the film for me. Why was it necessary to have him there? Did it lend gravitas? Kudos? Give us some level of insider knowledge? No, not really. It was Bob Geldof talking about Bob Geldof. It just meant that the film publicity can say it features some exclusive interview footage with a twat talking bollocks.

Loads of music documentaries get celebrity musos in to usually state the obvious. Yes, this band were/are great, yes they influenced my own career massively, yes they changed music forever and so on and so on, blah, blah, blah.

Look at this list of musos featured in music docs: 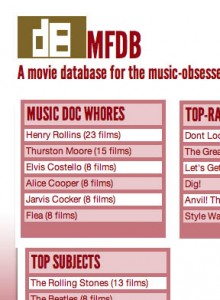 I’ve nothing against Henry Rollins but appearing in 23 music docs? That’s a lot of head talking! There was a time when Paul Morley appeared in so many arts documentaries that I began to wonder how he actually found time to do anything else in his life. And after a while it inevitably becomes more about the celebrity talking rather than the subject.

Anyway, when I was making this film about the Levellers I had to make a decision about whether I went down that particular path. I thought I would give it a go. First up was Frank Turner who I interviewed backstage at Beautiful Days. Frank really wanted to do the interview because he was such a massive Levellers fan and they had influenced him massively and he could play the first two Levellers albums from start to finish. He was a lovely bloke. Down to earth, candid, engaging and funny. We only talked for about half an hour and I thought we’d got some good stuff.

The next day at the same festival I asked another “celebrity” for an interview. I explained to him what the film was about. His first question was “How long do you want?” “Ten minutes?” I replied. “Five, go and get your camera” he curtly replied. At that point, hungover as I was I thought should I just say “Look, I’m not even that bothered if you’re in the film and to be honest talking to me like that, well, you can go and fuck yourself you arrogant twat”.

But I didn’t. Some level of professionalism kicked in as I bit my tongue and went to get my camera and subsequently did a short interview with him which was a largely pointless exercise and just left me feeling dirty and depressed. I gave up on the “celebrity talking head” idea after that and re-thought the method of telling the Levellers’ story via different channels.

Comparing that experience to the warmth and humour and openness of Brian and Sheila Cunningham left me in no doubt who I would rather see up on a screen. Their passion and insight into their son spoke volumes to me and gave us an angle into the development and significance of the band which is far more enlightening than a few off-pat answers from a tired and spoilt pop star. They felt so much more “human”. And genuine. And they gave me biscuits.

As for Frank Turner, well I’m sure he’ll turn up on those ever-expanding DVD extras.