So one day in December 2012 me and the uber-talented Canadian FCP editor-cum-cameraman Jim Scott set off to Crawley to film with Jeremy’s mum and dad, Brian and Sheila Cunningham. I was hoping that they could give us some back story into how Jeremy ended up doing what he did in his life and maybe we would learn something about his upbringing, his education and his early exploits.

In the words of Marti de Berghi, director of the greatest music documentary of all time, Spinal Tap, “we got more; much more”. From the moment we arrived at their secluded cul de sac when Sheila answered the front door it was apparent that they were “up” for the interview. Chaos immediately ensued. Me and Jim were shell-shocked. 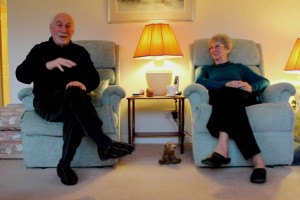 Before we could even focus our Canons, check sound levels or even put our bags down Brian and Sheila launched into a detailed account of the first time they had ever seen the Levellers live (it was at Brighton Urban Free Festival if you’re interested).  It was a fantastic anecdote which immediately sent us pell mell into a guided tour of the bathroom which was full of Jeremy’s artwork, and the hall (gold discs) and to bear witness to the one centimetre diameter spot of black ink on the settee in the living room (where Jeremy spilt some ink whilst illustrating a poster for the band’s Albert Hall show).

The rapport between the two of them was amazing to witness. It literally was a case of lighting the blue touch paper and standing back – well back, because Brian, an ex-boxer, found it impossible to stay sat down. He bobbed and weaved his way through the interview, occasionally leaving the room and returning with some golden nugget from Jeremy’s childhood. Jeremy had made the wise decision to leave the house whilst we talked to his mum and dad as he was well aware of their propensity for embellishment and/or mis-remembering various events. Not wanting to spend his whole time pedantically correcting them he took the dog for a walk instead. Wise, I thought, very wise.

Brian and Sheila were on fire; they were in fact like an old married couple finishing each other’s sentences, correcting each other mid-flow, rolling eyes and laughing at each other’s inability to totally recall a tale. Their stories were priceless, their candidness revealing, their unconditional love touching.

Some will love Brian and Sheila in the film and inevitably some won’t but to me they are stars, absolute stars and they have brought an aspect to the film that I could only have dreamt of. When Brian, stood up and head out of shot, proclaims that Jeremy’s friends hugged him saying “You saved our lives more than once Mr Cunningham!” my heart melts whilst guffawing loudly every time. Who’d have thought that this loveable, irascible old man was responsible for keeping the Levellers alive when they were squatting in Brighton.

We salute you Brian and Sheila Cunningham!