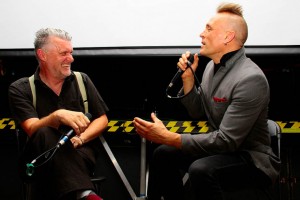 So I’ve spent the last two years [at least!] creating this film, producing my very own baby after a very hard labour that I am finally, massively, ridiculously proud of. It’s been a struggle though; a battle, a painful, painful process riven with strife and doubt and fear. I’ve basically been through the whole creative maelstrom, step by step, that goes something like this:

Well, to be honest, maybe I only got to number 5 but you know, I feel as though I’ve finally cracked it. Finally all that toil and sweat and tears and sleepless nights has gotten me somewhere. To my goal. I’m living the dream. I’m high on adrenaline and relief and joy. I’ve done it. Solved the conundrum. Completed the jigsaw. Defeated the demons. I’ve finished my film!

Except I haven’t. Because this isn’t the end. No. This is just the beginning…

It’s Sunday 15th June and on a small stage in the basement of the Red Gallery in East London the Levellers are soundchecking. I’m already relieved: the band are here, there is a stage and they look happy. Given the lead-up to getting the band to agree to do this acoustic performance and the gentle wrangling and negotiating with band, crew and festival alike this is a total result! I’d entered the film into a number of film festivals and had been waiting for a “yes”; after a few knockbacks, which however polite or encouraging they are; still hurt, the wonderful East End Film Festival were very keen to screen it; they loved the film and would love to get the band to perform as well. It would be an event. I’m overjoyed and incredibly nervous at the same time. I’m trying to be blasé about the whole thing but really I’m delighted this is happening and just hope, hope, hope that everything goes to plan.

The screening is a sellout well in advance and it’s apparent that there’s a lot of Levellers fans here; definitely not a “documentary” crowd as such, and so the atmosphere is electric and expectant. The musician and writer John Robb introduces the film and admits that he has yet to see it but is confident that it will be great. And then we’re off. Squeaky bum time.

Eighty minutes later and the film has gone down really well; it’s fascinating for me watching it with a large crowd, noticing what gets a big laugh, what gets missed and what bits fall flat. I’m sat with my friend Lorraine who openly admits to not knowing the first thing about the Levellers. I have to apologise for laughing at my own film a few times but she loves it nevertheless. This makes me very happy, knowing that someone can come to the film cold and be totally engaged; we must have done something right! And apart from the wonderful audience reaction I was relieved and happy to hear and see the band themselves totally enjoying it. All those disparaging comments, the bad press and the jokes and the teasing and the one liners are embraced wholeheartedly; proof to me that this band are an amazing bunch of ne’erdowells.

We get an amazing response at the end of film, and that combined with the rush for the toilets means that most people miss the final conversation between Jeremy and Boakesy about the band’s 25 years of subsidized dysfunctionality. I don’t mind though; this response is well worth missing it for.

The Q&A that follows with John Robb flies by; I only wish we’d had time to take questions from the floor but we have to finish quickly as the Levellers acoustic performance is about to begin. Someone on twitter said they blasted the roof off the place [good going as we were in the basement] and I think they were about right. I use the word “triumph” more in jest than in seriousness but yeah, I was pretty [legally] high on the journey home back to Brighton afterwards where me and Steve [one of the exec producers from the Levellers’ office] gabble constantly about future plans and running through the evening’s events until that neverending late night train journey to Brighton inevitably sucks the life out of us and we eventually come down back to earth. What a great evening; hopefully there are going to be many more. See you at the next screening hopefully! 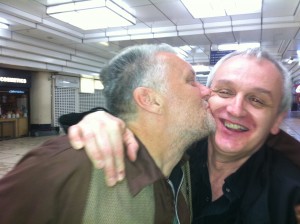