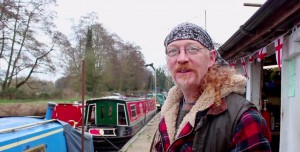 Sometimes things just don’t turn out the way you thought they would.

I had always wanted this film to be a combination of revealing insight into how the band function and how they’ve managed to stay together for so long without killing each other or ending up in court and a human story where we get to see and understand something of the band members’ personal lives and their characters.

Obviously Jeremy features very heavily as the leading character and we have lots of footage to understand him and love him as an individual as well as enjoy him presenting various ideas about the band.

Other band members feature less, or in some cases, a lot less due sometimes to their own willingness and desire to be involved and sometimes down to me deciding what is working and what is relevant. Occasionally an interview would go better or worse than planned and I would reassess how important or valuable that particular scene was for the film. Occasionally interviewees would be interesting and revealing off camera but as soon as the camera was switched on become a bit too guarded or self-aware or just clam up completely. Sometimes this was my fault for not pressing the right buttons, asking the right questions or trying too hard to get the interviewee to say what I wanted for the sake of my film. Other times, the interviewee just wasn’t open enough, candid enough or interesting enough. And sometimes it was just no-one’s fault; it just didn’t work it.

When I first started working with the band [and I’ve already previously mentioned this in an earlier blog] Simon scared the living daylights out of me with his scathing, first night midnight rant on the sleeper bus. He’s going to be a handful I thought. And yet what transpired was that Simon became for me at least, this loveable renegade, the loose canon, as Jeremy describes him, a man of extremes but also a charming rogue who I found to be open and honest as well as a bit bonkers at times.

Simon has a scene in the film which has caused a split amongst people who have seen it. After the death of both his mother and his long term partner Jude, Simon moves onto a houseboat. Those who know the Levellers well, will immediately recognise the significance of this because of the Simon-penned song “The Boatman” on “Levelling The Land”. He admits himself that he is finally living his dream despite the very tragic circumstances that have brought him here. I like the scene; to me it was one of the few really human moments in the film where we forget that he’s Simon from the Levellers and that here is a man struggling to readjust to a new way of life following two massive losses in his life. We see a side to him we haven’t previously seen and I buy it; I find it powerful and revealing. I also think it has a positivity and acceptance which might even be helpful and comforting for some.

But is this scene more important than learning that the Levellers never cracked America? Is listening to Simon describe his day to day routine more relevant than finding out why Stephen Boakes brushes his teeth before he goes on stage? Who knows? It’s all subjective anyway isn’t it? It’s a strange process when you’re deciding what to include and what to leave out of your film; it raises so many questions about what is the truth, whose story is this, how do I as a director, influence and manipulate the viewer, and can anyone truly make a completely objective documentary?

I believe I have created a film about the Levellers that tries its’ damnest to be honest, revealing, warm and entertaining. Not everyone will be happy with the whole thing; that’s inevitable but given the circumstances I do believe that what we have made is a touching, poignant, sometimes hilarious film which is as heartwarming as it is rocking and as Jeremy so rightly states a wonderful  ”journey through 25 years of subsidised dysfunctionalism”.

I hope you enjoy it.